We sat down to talk about the reality of live-captioning with two of our Caption Editors, James Brown and Faith Hamblyn.

Kia ora korua! Tell us a bit about yourselves and your ‘journey’ into captioning.

James: “I got into captioning a long time ago. It combined my love of TV (I learnt most of what I know about the world – particularly the obscure things – from paying attention to TV), with the perfectionist streak in me that loves the accuracy of grammar and spelling. Captioning has been around since the ’90s. It evolved from a 1981 teletext campaign, to a whole ‘Media Access Services’ department at TVNZ (complete with floppy discs and a library of video tapes) to where we are today, where we work with technology to create about 450 hours per week of captioned content.”

Faith: “I was working in Legal Records Management – which is essentially the worst type of librarian you can be – it’s very high-stakes admin. I had a degree in film, TV and creative writing, and had heard great things about captioning. I joined in 2008.”

James: “As a captioner, you want to match the dignity of the occasion. You don’t want to be making mistakes that could be upsetting for people, particularly on a serious occasion. We’ve done live captions for the Black Clash, where the commentary is done by comedians, where you’ll record any obscenities. If it was something like HRH Prince Philip’s funeral, it would be a different story. You’re adapting to the tone of the content you’re captioning.”

Faith: “The recent funeral we provided captions for had quite a slow pace, so there was time to correct anything; unlike the COVID press briefings! But for the most part, those happened everyday – so we had lots of practice.”

How did you find that transition, from the normal schedule to captioning the daily press briefings?

James: “You know when there’s a natural disaster and people line up to give blood? Whilst it’s not directly helping in a front-line sense, you still know that you’re doing something to contribute. We were really lucky that when the level 4 lockdown happened and we had to go down to a skeleton crew, we were an essential service, and came in every day to provide access to essential information.”

What’s the physical reality of captioning like? Does your voice get strained?

James: “It can do, yes – it certainly gets tired. You re-speak for 15 to 20 minutes at a time; and then your shift partner takes over. Having to speak over people can go against everything about manners that you’re taught growing up! There’s a self-consciousness that comes with it too – you’re speaking alone in a room, sometimes it feels like you’re speaking into a vacuum. But when you get used to it, your voice becomes just a typing tool.”

Have there been any stand out moments in captioning for you?

James: “We were doing live coverage of the most recent US election, and out of the blue I was live-captioning Donald Trump’s non-concession concession speech… Wow, what a rollercoaster. Mostly with captioning, you’re completely absorbed, you’re trying to get the information being spoken out there as quickly as possible with as much accuracy as possible. With this there was no predicting it. He never finishes a sentence, and you never know where he was going to go… It was hilarious and exciting. They cut him off in the end.”

Faith: “I think mine was when Winston Peter was talking to Jack Tame. It was a very confrontational interview, and Winston kept calling Jack ‘James’. It was my mission to record every single time he said “James” for the community. I felt like I was constantly saying “comma James!” As captioner, you make these split-second decisions about what to include or not – it can be quite political in that sense. You could argue that recording something like that wouldn’t matter; but really, that’s the main thing that will be remembered from that interview.” 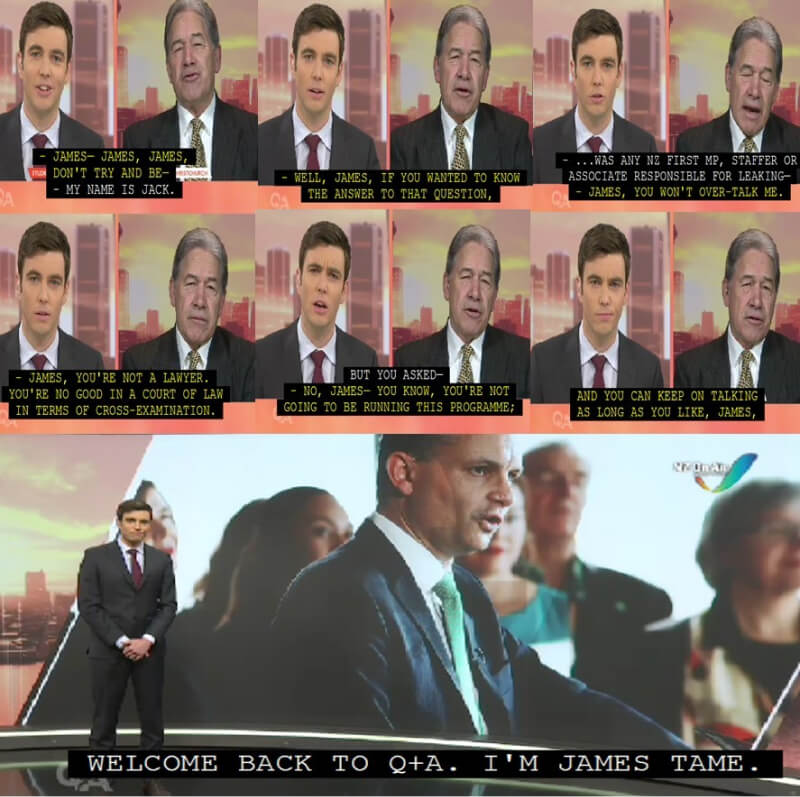